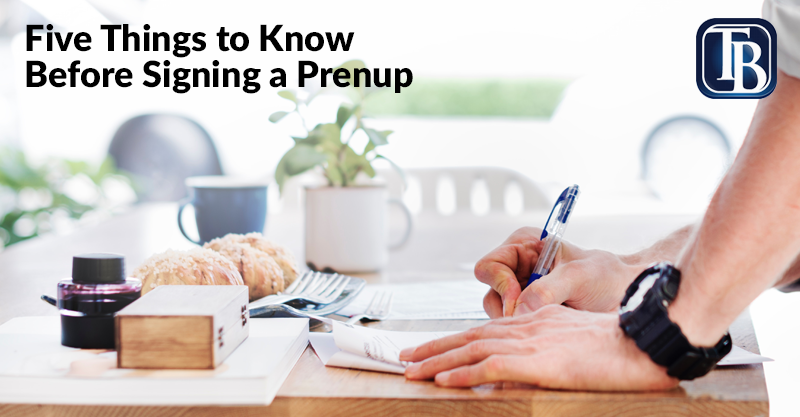 Prenuptial agreements get a bad rap as they are sometimes referred to as “divorce agreements.” People see them as a prediction that a marriage will fail or as insurance in case it does.

What prenups acknowledge is that one or both parties brings significant assets — or the potential of future inherited assets — to the marriage. Both parties have the right to protect those assets in case something unexpected happens.

As a family lawyer, I write prenups most often for younger couples where one or both has significant family wealth, and for older couples who are each financially well established on their own.

With wedding season in full swing, here are five important things to keep in mind with any prenup.

1) Never sign a prenup without your family lawyer reviewing it.

It is important that you hire a family attorney who is familiar with all divorce issues. I never engage a client to write a prenup unless the other party has a lawyer as well. It’s important to me that both parties are well represented because a prenup is like any other contract. You have the right to make sure your interests are represented, protected and, ultimately, enforceable in court.

2) Require a current financial statement and the last three Federal Income tax returns for you and your fiancée.

Enforceability of prenups is based on full financial disclosure. A lack of disclosure is one of the first and the most successful ways that any family lawyer will challenge a prenup.

That is why I insist that both parties have a current financial statement and each of their three most recent Federal Income tax returns attached as exhibits to the agreement. It is the only way to ensure that there has been full disclosure by both parties.

Sure, I have had couples request a prenup the day before their wedding – which is impossible to accomplish. This procrastination is far from ideal for both the relationship and the agreement.

Gathering information and negotiating the final agreement that works for both parties takes time.

4) Know the difference between and specifics of “separate property” and “marital property.”

How property is divided once the marriage dissolves is the basis of any prenup. “Separate property” refers to the assets that an individual brings to the marriage or gifts and/or inheritance acquired during the marriage, whereas “marital property” includes assets jointly acquired as part of the marriage.

There are two important things to know about separate property. The first is that Tennessee law considers income earned during a marriage as marital property unless it is specified as separate property in the prenup.

Income and appreciation in a prenup are two issues I look for when determining the validity of the agreement.

I usually see this in two ways. The first are families of young couples who push for the prenup because of wealth on one or both sides of the marriage. They simply see wealth as a family asset they want to protect.

With older couples, it is usually adult children who get involved. They want a prenup to protect assets for themselves and their children in the future.

Following these guidelines — by involving a family law attorney on both sides and allowing time for the process — will help families reach a level of comfort and understanding.

John Hollins Jr. is a partner with Thompson Burton and has three decades of experience in family law. He is the author of Surviving Divorce: A Lawyer’s Common Sense Guide To What You Should Know Before, During and After a Divorce.

The post Five Things to Know Before Signing a Prenup appeared first on Thompson Burton PLLC.

Natura and Avon: Will This Acquisition Work for Both Sides?