A widely accepted claim about the industry says it is not a business model that can be pursued for a long period of time. So, both the investors and the individuals should think twice before getting into it.

While there are no meaningful statistics that prove direct selling companies have shorter life spans than say, tech start-ups, there are many people that still believe and support this narrative.

On the other hand, we know that there are strong evidences within the direct sales industry that indicate this claim may not have strong ground. And one of these is the presence of the world’s largest direct sales company, Amway. 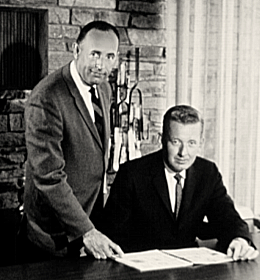 They had known each other from high school years when they decided to join forces to set up their own business. However, Amway was not their first business venture that they started. The two friends went into various businesses: They had a flight school, opened a drive-in restaurant, and bought a sailing vessel to launch a sea-going business.

In 1949, DeVos and Van Andel joined Nutrilite to sell the company’s food supplements as its independent distributors. By 1958, the two partners’ organization at Nutrilite reached 5,000 people.

One year later, they started selling the famous “L.O.C.” under the Amway umbrella.  The product was purchased from a chemist in Detroit. They adapted the principles of multi level marketing that they had worked with at Nutrilite. They sold so much that after two years, DeVos and Van Andel was ready to open their own manufacturing unit.

The first international expansion was into Canada in 1962 that was followed by many others in time. Amway has been the world’s  largest direct sales company since 2012.

Today, Amway reports it operates in 100 countries and territories, employing in excess of 16,000 staff.  Amway’s top ten markets in 2018 were China, Korea, the US, Japan, Thailand, Taiwan, India, Russia, Malaysia and Italy. It owns 15 manufacturing and processing plants all over the world and holds over 800 patents.

Amway’s products fall under  three major categories: Nutrition, beauty-personal care, and home care.  Nutrition is the company’s largest revenue-generator  with 52% share in its global sales. Then comes beauty and personal care with its 26% share and home products with 20%. 2% of Amway’s sales is classified under “others” category. Nutrition  was also the highest-growth-category in 2018.

Amway prides itself with having 450 unique products and also with its Nutrilite brand for being world’s top-selling vitamins and dietary supplements brand. “Protein Powder”, “Dietary Supplement” and “Vitamin C Plus” are the three best-selling nutritional products.

Amway did a major move at the beginning of this year and appointed a professional as its CEO, a new position in this family business. CEO Milind Pant was the President of Pizza Hut International previously.

Obviously, Amway is not the only company that has been operating in the direct selling industry for decades.

Avon, for instance was founded in 1886. Earl Tupper established Tupperware in 1946. Avon’s current owner Natura celebrates its 50th anniversary this year. Europe’s largest cosmetics direct seller Oriflame had done this in 2017. Next year, Herbalife will be 40 years old. Germany-based household products direct seller Vorwerk has been in business for 135 years. Gene and Kristine Hughes opened the doors of Nature’s Sunshine in 1972. It was back in 1962, when Mary Kay Ash founded the company carrying her own name. And yes, these companies and many others are still alive and kicking!

So, when somebody says direct selling as a business model has a short life span by nature, it is worth remembering these facts.

Hakki Ozmorali is the Principal of WDS Consultancy, a management consulting firm in Canada specialized in providing services to direct selling firms. WDS Consultancy is a Supplier Member of the Canada DSA. It is also the publisher of The World of Direct Selling, global industry’s leading weekly online publication since 2010. Hakki is an experienced professional with a strong background in direct sales. His work experiences in direct selling include Country and Regional Manager roles at various multinationals. You can contact Hakki here.

HBS professor Sucher: Boeing a template for how to not be trustworthy